My eldest son has been told by numerous people that he is actor Ansel Elgort’s doppelganger.   He channeled this fully a couple years ago dressing up as the young Elgort from his movie Baby Driver. 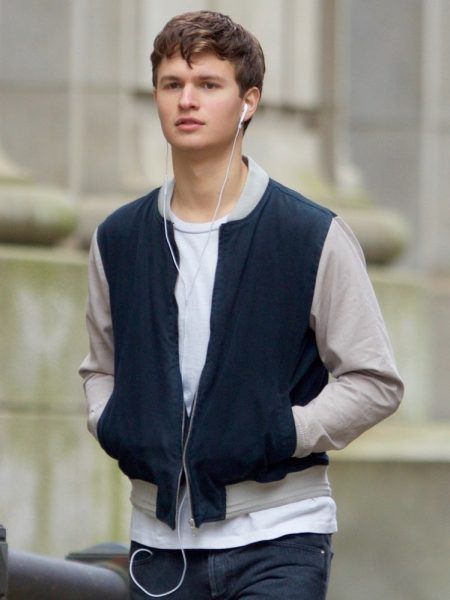 Elgort is in the new movie The Goldfinch.   His character, Theo Decker, in the movie has had a rough life, which is the understatement of the day.   Every where he turns it seems that people have disappointed him or betrayed him.   The story is rather convoluted to be precise as it jumps around in time, and as one watches it is more fantastic that all these things could happen to one person.    In summary, as a young boy Theo is at the New York Metropolitan Museum of Art with his Mom, when  a bomb goes off.   His Mom and many others are among the killed.   His parents are estranged, and he has nowhere to go, and decides to stay with Nicole Kidman (a fate worse than death as far as this guy is concerned).   She is married with a few children of various ages, the eldest being an obnoxious jerk.   Another is roughly the same age as young Theo.  The Mom is kind to him.  As the young Theo gets more comfortable in his surroundings his estranged father shows up.   He is moved from NYC to Las Vegas where Dad (played by Luke Wilson) shows numerous ways that parents can betray their kids.   I won’t continue further with the plot as I said earlier, it was convoluted.   It turns back onto itself, and the theme is really one of betrayal and looking to preserve that which should last.   Finn Wolfhard is part of the cast and seems to be everywhere with Stranger Things and IT, always seeming to play similar characters.  He’s an odd looking duck.  Add a Russian accent here (poorly done) and he helps to move the story along in unexpected ways.   I haven’t mentioned it yet, but the Goldfinch is a painting which was on the wall at the museum.   For me the challenge was believing that all these things can happen to this one young man.   The last act is adding a thriller aspect to it, which flies in the face of the rest of the film, which was a family drama.  I am using the word “thriller” in its most generous form.   I wasn’t sitting on the edge of my seat.   On the whole a bit disjointed and disappointing.   Maybe the novel read better.    One can always hope.   Many books don’t translate well to film.  This may be just one of them.

Downton Abbey is on Crave now.  Just released.   This is the film and not the series that was available on Netflix and other streaming services.  The series began in 2010 and had 52 episodes on 6 seasons.   It is a modern retelling of the British series Upstairs, Downstairs in theme and not translating those stories here (that show is unwatched by me).  The movie is a continuation of the last story of the Crawley family starting from 1912 after the sinking of the Titanic.   This is quality UK based TV with good performances, a gorgeous chateau and people-driven drama.  I have to admit that Dame Maggie Smith steals scene after scene with her performance as the matriarch of the Crawley family.   Her son, Robert The Earl of Grantham, is the head of household at a time when things are changing dramatically in UK society.   Women’s roles are changing, young people don’t want to be confined to traditional roles and the house struggles with being able to maintain staff and a way of life.   The movie looks to have an event involve all the people in the household.   Do you need to watch all the TV series to see the movie?  It helps.   You’ll know the history of some of the characters and understand why certain events can prove to be a source of angst for them.   Notably it would help to know that young Tm Branson is part of the “upstairs” part of the house, but in the series started as a chauffeur in the “downstairs” part amongst the help where the youngest Crowley daughter Sybill fell in love with him.   He is Irish and has distinct opinions about the British occupation in Ireland.   Sybill passes away in child birth.  In this movie the drama is created by all involved by the notice of arrival of the Royal Family arriving at Downton for a dinner, parade and overnight visit.   There is an emotional component near the end that brings the story together that I won’t divulge.   Generally I found the many characters having to be dealt with in a two hour film can’t compare to 52 episodes that have come before.   Do we really need to see the story of Thomas Barrow as the now Head Butler?   It added very little for me.   The engaged Daisy story didn’t add much either for me.   In the end I enjoyed this, and brought together a few of the actors that were in Imitation Game.   That was good to see as well, like Tom Branson.

This week I finished watching season 1 of Narcos.   Set in Columbia in the early 80s, you see the beginning of the cocaine cartel shipping their product off to a voracious US customer base.   The focus is on Pablo Escobar, the kingpin and Don who heads a coalition of drug producers and dealers and drive astronomical profits along the way.   He is the ideas guy and brains of the operation.   He is ruthless.   He has no soul.   He has his ambition in mind and the idea that he should and could become the saviour for his country Columbia.   I gave some background last week.   The ending of Season 1 takes place at the luxurious castle acting as a prison for Escobar and his men.   The army has been sent in by the President, but it is unclear just how motivated that they are to finish the job.   The cliffhanger is whether or not Escobar has survived the activities at the castle.    It is interesting to watch.   Well acted.  It shows a place where no one is safe.   It is a police state where an ongoing war with heavily armed drug thugs makes every day life unimaginable.    I cannot imagine being an ordinary citizen in Columbia in those times.   Season 2 continues the story with the characters who manage to survive the ending of Season 1.    I will continue watching.