The last movie I saw at the theatre was Professor Marston, so I have been watching more on Netflix and catching up.

First was the Netlfix film the Meyerwitz Stories (New and Selected) was one of those, reviewed at RogerEbert.com and given 4 stars.   I was intrigued.   After seeing it, I cannot agree with the assessment.  Not sure what all the fuss was about.  Here a good cast is playing a family in NYC.   Dad (Dustin Hoffman) is a multiple married older sculpture/artist who never has quite made it.  Some of his contemporaries have and it is a sticking point for him.   He is focused on one thing, and one man, and that is himself.   He has three children, two from one woman (played by Adam Sandler and Elizabeth Marvel – almost not recognizable from her role in House of Cards), and then youngest with another woman Ben Stiller.    Dad’s children have not “made it” as artistic people, much to his disappointment.  The children come together as something happens and then interact with one another and their father.   The film is told in chapters with the focus being outlined by that chapter title.    For me, I found the chapters truncated, and they can end quickly and with little notice.    There is a flow and direction, but I am not sure I need nor want to follow.   I feel sympathy for the children, and recognize that this would not have been a fun childhood in those households, and later the broken homes.   We adults can shape and impact those offspring in undetermined ways in the future by the acts of selfishness at the time.  Well, I can only speak for myself but it holds true.   Anyway, despite the glowing review, mine won’t be.   I found this slow, and not engaging and not worth my time.   Sandler does a better turn once again as being a more serious actor; as opposed to the yelling and profane man-child.   Emma Thompson plays the latest wife who is drunk and forever locked in the 60s.   In the end, there were some smiles but they were too few and far between.

We began watching Stranger Things 2, and finished 4 episodes.  On the whole it started off fairly slowly in re-introducing these characters.   I found myself asking aloud, “what happened in the previous season” and once finally coming up with it, seeing where this one takes us.   Clouds and storms are the horizon and poor Will from the first season seems to be the target once again for visions and bad things.   The rest of the younger cast continues on in school and deals with some new characters.   The adults are forging some new paths it would seem, and it moves along.  While episodes 1 and 2 were slower, episode 3 starts to get things moving, and episode 4 follows.    For me, there is the plot but I almost enjoy as much the staging and homes from back in the mid-80s.   Set design people had fun finding games, and trinkets, food and commercials.   I will continue with this and see where it ends up.   It is an 80s horror film cliché that hiding the unknown from people who may help can cause serious consequences (just ask the cat!)…..

As an aside, I wanted to see what the Top Box Office so far during 2017 has been.  It is recognized that this year (and particularly this summer) has been one of the slowest and lowest revenue years in quite some time.   There have not been many films to be excited about.   When I look at the list I have a few observations. 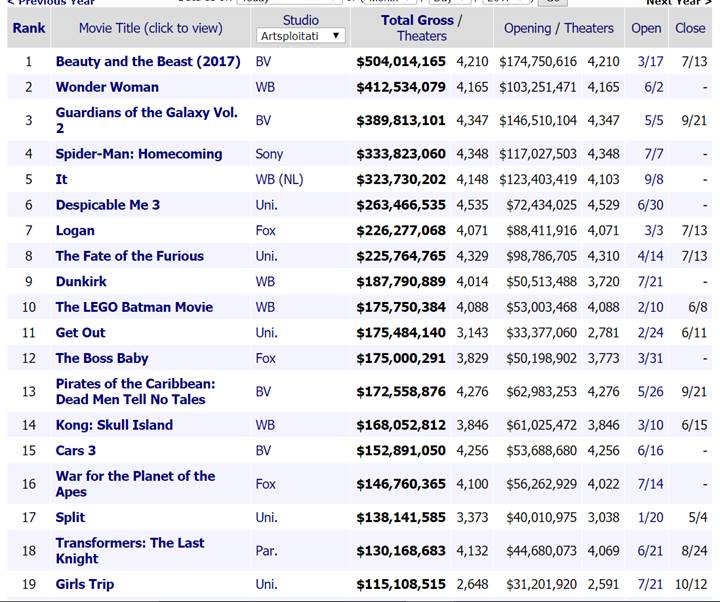 First, like the years before it I am amazed at all the Superhero movies.   I also recognize that Star Wars will blow away the competition this Christmas season once again.   But check out some of the other titles here (Boss Baby $175M, Transformers $130M, Emoji Movie ??! $85M!!!)  Boss Baby made more than Blade Runner AND Alien Covenant COMBINED!   It makes me shake my head with the moviegoing public.  How sad when they spend money on absolute junk, and a movie like Atomic Blonde comes in at $51M.   I am still amazed at how Blade Runner has fallen off a cliff at the box office.   Beauty and the Beast was not the original, and Emma Watson cannot sing.   Dunkirk at $187M is NOT an American film so I am not surprised, but still it is in my opinion the best film of the year.   We will see if it can hold that title.   I am saddened and disappointed.   Did you know that there is a new Mary Poppins coming out and Emily Blunt is the star?   Some good films are coming, and I hope to get out again at some point.